Home › Other › Australiana › Bush tucker 2 – How do you prefer your witchetty grubs & bogong moths?

Bush tucker 2 – How do you prefer your witchetty grubs & bogong moths?

Moths, grubs, ants and other insects were important sources of energy for indigenous Australians whose traditional bush tucker diet was high in carbohydrates, protein and nutrients, and relatively low in fat and sugars.

Witchetty grubs, for example, were a staple food for many thousands of years and were eaten either raw or roasted. Even I remember finding witchetty grubs with my dad in the bush and cooking them on a griddle (like in this video – which some readers may find disturbing) along with yabbies from the dam.* 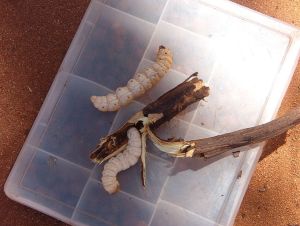 The true Central Australian witchetty grubs (Endoxyla leucomochla) live underground and feed on the roots of the ‘witchetty bush’ (See here for a video of locals digging for witchetty grubs and honey ants), but the term is also used for a wide range of stem-boring and root-feeding larvae of cossid and other wood moths and even some beetles.

The idea of marketing these grubs commercially has been around for decades but has not yet taken off.

I remember seeing cans of witchetty grub soup when I was young being sold by Peter Beattie at his paddle steamer restaurant at Swan Hill in northern Victoria. (See here for a nostalgic picture of the label.) Apparently he relied on local schoolchildren to find grubs along the banks of the River Murray.

(See here for a recipe if you want to make your own soup.)

Chef turned farmer, Lynton Manley, preferred to blanch witchetty grubs in boiling salt water before cooking them lightly and serving them on skewers with vegetables at his restaurant on the New South Wales south coast. He was breeding his own witchetty grubs back in the 1980s and discovered first hand some of the challenges:

“They take three years to mature, to thumb-length size, but I am continually stumbling on breeding obstacles such as fungal disease and grubs crawling over each other and puncturing themselves.”

Beattie, Manley and other pioneers of the industry were even exporting grubs back then but reliable supply was, and still is, a problem. (Great distress resulted in 2013 when the ITV reality show ‘I’m a celebrity’ had to cut witchetty grubs from their bush tucker food challenge due to limited supply caused by an unusually wet year.)

A 2006 study examined the feasibility of commercialising witchetty grubs as an Aussie bush food. It included a survey of 1,273 Australians about their perceptions of witchetty grubs:

As these grubs take a couple of years to mature in the wild (but can potentially reach full larval size in around twelve months with a controlled environment and appropriate diet), the study recommended that any commercial witchetty grub venture would probably need to be supplemented by other bush food species with shorter life cycles.

For example, bogong moths (Agrotis infusa – not to be confused with ‘bogans’ mentioned in a previous post) could be grown and harvested as well. They are said to have a nutty taste and can be roasted (minus wings and legs) or ground into a powder and then baked in a ‘moth cake’ or pattie.

Bogong moths breed in the pastures west of the Great Dividing Range in Queensland and NSW and feed on nectar from eucalypts, grevilleas and other flowers. They migrate to the Southern Alps for the summer where they shelter in cool alpine caves and dark crevices and rely on their fat reserves to sustain them.

Millions of these large moths pass through Canberra on their way to the high country each year. During this time, you can visit a local Canberra cafe, Ironbark, to try original dishes such as bogong moth frittata served with wattle seed damper and bush tomato chutney.

Bogong moths that are blown off course and end up in Sydney need to watch out for French chef, Jean-Paul Bruneteau, who says that these moths are much better to eat than snails. He recommends removing the wings and roasting them in the oven for three minutes with a splash of canola oil or putting the moths in a coffee blender and sprinkling them into an omelette, pancake or crepe.

Relatively few survivors make the return flight at the end of the summer – as many moths fall prey to spiders, lizards and other reptiles, birds, mountain pygmy possums, marsupial rats and other local wildlife (as well as some humans). After summer their nectar reserves are depleted so moths at this time of the year apparently taste nuttier and less sweet.

Residue found in the moths’ summer refuges indicates high levels of arsenic that may have come from chemicals used by farmers to reduce the crop losses caused by the moths’ cutworm larvae and other pests. Contaminated moths are suspected of poisoning birds and other predators and may be cause for caution in humans who wish to partake of large numbers of this seasonal delicacy. (However, the multiple currawong deaths during the 2003 migration are attributed to a moth eradication program at Parliament House – not arsenic.)

Commercial production can help to control arsenic levels but, as with everything, moderation is still advisable. The high fat content (said to be three times the fat and almost twice the calories of a similar portion of a Big Mac) has led experts to recommend that we eat no more than 10 moths per day. I wonder how many witchetty grubs we can safely consume each day?

See also my previous post about bush tucker plants (here). Lots more to come about bogong moths in Canberra and other insects (here).

If you are interested in paddle steamers, he also wrote a song called ‘River Boat Man’ (here).

* I ate far more witchetty grub lollies than the real thing. They are not as nutritious but at least there is no chance of them biting your tongue if you choose to eat the head.

Like Loading...
‹ Bush tucker – I say potato, others say yarla
Is Canberra’s latest bogong moth sculpture the next big thing? ›