Apart from macadamia nuts, most people (including many Australians) know very little about Aussie bush tucker – despite the fact that we have an amazing variety of edible plants, such as lilly pilly, quandong, wattle seed and lemon myrtle, on our doorstep. Many of these plants have been staples of the hunter-gatherer diet of indigenous Australians for at least 40,000 years.

(Watch this fantastic SBS Food Safari video clip for an overview of the bush as both supermarket and pharmacy.)

In a new take on fusion, Australian chefs are starting to use and promote native ingredients. For example, Kylie Kwong says the salty, sour and citrusy native bush flavours perfectly suit her style of cooking and provides tips on how to source and use some of the plants (here and here).

The raw materials available to us include a wide range of roots, tubers, leaves, fruits, flowers, berries, nuts, seeds, sap and herbs with culinary potential. Among them are native potatoes, bush tomatoes and cucumbers, limes, figs, plums, cherries, apples, grapes, pepper and sea parsley. (The Native Tastes of Australia site provides lots of recipes for each of the plants it mentions.)

(A few of these plants, such as snottygobble and pig face, could do with a PR makeover – noting that Australian wild spinach is now successfully marketed as ‘Warrigal greens’.)

In addition to great flavours, medicinal and nutritional benefits, these Aussie bush foods have also been found to possess valuable antimicrobial, antioxidant and emulsifying properties that may be able to substitute artificial additives to reduce spoilage and kill pathogens etc in future.

A critical constraint in expanding the use of these foods is being able to ensure reliable supply. A number of businesses (e.g. Outback Pride – a bush food network providing employment in remote communities) are pioneering this industry and now offer raw produce and value-added jams, sauces, flavourings and other exciting products.

Another challenge is knowledge. What can be used and how?

While some native plants (or at least some parts of them) are safe to eat as is, others should not be consumed at all or only when ripe (e.g. kangaroo apples) or need to be treated in some way to make them safe or palatable to humans (e.g. nardoo and cheeky yams).*

You need to be very careful if you are experimenting and make sure that you have verified your information and properly identified the plant. It is much better to do some research beforehand or buy through trusted sources rather than follow the ‘try, die, learn’ empirical approach.

Fortunately there is lots of information available and research continues – but some of the advice is contradictory. (See this bibliography compiled by the Australian National Botanic Gardens or the Australian Native Food Industry Limited (ANFIL) website that aims to ‘Advance Australian Fare’!)**

Culinary institutes and training programs have also been set up to teach and build upon the information about these foods that has traditionally been passed down over the generations in indigenous communities.

A fun (and safe) way to learn about bush foods is to visit cafes and markets featuring local producers, such as the Gardener’s Lodge Café in Sydney run by an Aboriginal elder and food educator (see here – I am keen to check it out), or attend events such as the 2014 Bush Food Festival in Western Australia (where you can taste local delicacies such as crocodile burgers with wild lime sauce or native plum ice-cream).

Native plants are starting to gain ground but we still have a long way to go towards creating a truly indigenous cuisine (unless you count meat pies, vegemite, chiko rolls and tim tams).

As I started to research this post, I was surprised by how many potentially edible plants I have in my own garden. For example:

You can suck the sweet nectar from banksia (pictured at the start of this post), grevillea, callistemon (bottlebrush) and hakea blooms, shake it onto your hand and lick it off, or infuse the flower spikes in water to make an energy drink. (To avoid stripping the plant, hot water can be poured over the flowers while on the bush so that they can still set seed.) 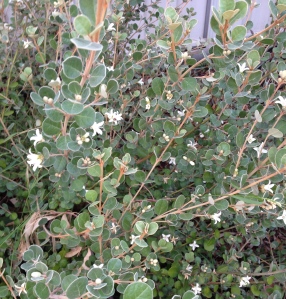 The leaves of Correa alba (pictured – with white star flowers) and Kunzea ambigua can apparently be steeped in water to make a tea.

I knew about saltbush lamb (where the flavour is imparted to the meat by sheep grazing on this plant) – but had never thought of using the fresh or dried leaves (e.g. stir fried old man saltbush leaves with garlic and tamari) or the seeds (e.g. lemon-infused fish cooked in paperbark with lemon myrtle and macadamia oil) in my own cooking.***

If I were really keen, I could grind the seeds of Lomandra longifolia (Spiny-headed Mat-rush) into a flour to make cakes and eat the leaf bases and flowers (as long as I avoid the spikes – and/or could make baskets and bags from the tough dried leaves).

I could also eat the raw blue fruits and shiny black seeds of Dianella tasmanica ‘Blue Flax Lily’ (when ripe) or make them into jam, or pound and roast its roots before eating them. However, some species are poisonous – so perhaps I should just use the leaves to make string to make netting and trap some bogong moths, small animals and birds instead?

Between us, my neighbour and I have lots of different wattles – but unfortunately none that provide edible seeds that can be roasted and ground and used in Wattleseed and Macadamia Anzac biscuits (see here for a recipe) or a chocolate and wattleseed self-saucing pudding (see here for the recipe).

My neighbour does, however, have a Xanthorrhea australis ‘Grass Tree’ (pictured) growing that has an edible stem and leaves when young and flowers that are rich in nectar. As they grow very slowly and flower mostly after fire, we probably shouldn’t rely on this plant for food.

The floral emblem of the ACT (Wahlenbergia gloriosa or Royal Bluebell) appears on my nature strip every so often and is apparently great as a garnish in salads but is protected and cannot be picked in the wild. Better to use the edible flowers from my Grevillea australis or help myself to some of my neighbour’s native violets (Viola hederaceae) instead!

There is a veritable cornucopia of native foods in my neighbourhood – but I still doubt I could survive for very long without the shops! Stay tuned – insects next…

* Incorrect preparation of the spores of the Nardoo fern (Marsilea drummondii) may have contributed to the unfortunate death of famous Australian explorers Burke & Wills in the outback.

** This is a play on words of our national anthem (see this earlier post).

*** Some varieties are being bred specifically for the gourmet food industry and are not necessarily the same as those found in the wild or gardens. The saltbush in my garden is not the same species as the one mentioned in the recipes. (The organisation I work for conducts research into native foods and worked with Outback Pride to improve the Old Man Saltbush strain. I have no involvement in this research and take no credit.)

Like Loading...
‹ Did you know that some ladybirds are dangerous to humans and might sue you?
Bush tucker 2 – How do you prefer your witchetty grubs & bogong moths? ›