Home › Other › Gardens › What do pop art signs & a gasworks redevelopment have in common?

What do pop art signs & a gasworks redevelopment have in common? 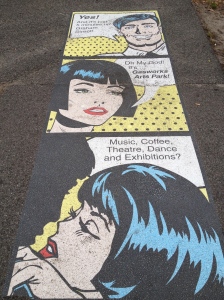 When I was in Melbourne recently, I noticed some public art on the footpath that proves that signs do not have to be boring and can even reflect the function (and potentially the character) of the destination they are promoting.

The sign is in Albert Park and points to the Gasworks Arts Park, near the boundary with Port Melbourne. 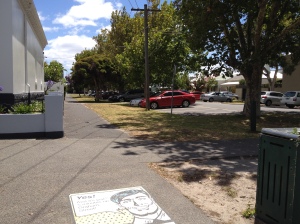 One of the reasons I was visiting the park was because it contains a sculpture by Matthew Harding – the same artist responsible for the sheep, beetles and dog in a previous post (here).

The gasworks sculpture is called ‘Midden’ (2008) and was carved from Victorian bluestone. Its series of odd shapes claim to ‘reflect the industrial, cultural and ecological heritage’ of the site.

The park is home to a number of  other sculptures, art studios, galleries, weekly farmers’ market, a theatre and cafe. It’s also a great place for locals to walk their dogs or have a picnic. (See here for more sculptures at the park.) 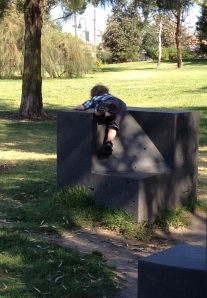 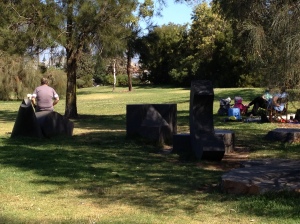 The South Melbourne gas plant produced, purified and stored gas that was made from coal delivered to the nearby port from 1872 to 1957. It was made redundant by similar gas plants outside the city in the 1950s that were in turn superseded by pipelines from natural gas reserves discovered in Bass Strait.

After the facility was finally closed in 1971, soil testing identified contamination that was partially remediated and then capped. The site reopened in 1986 as a public park and is now a much-loved cultural precinct.

Monitoring and management of groundwater and vapour issues continues at the site and required an exemption from local water restrictions to allow irrigation to continue throughout the last drought – so green grass is usually guaranteed.

(See here for a history of the site or here for a photo of the area c1920 – the park site is just beyond the gap between the two gas holders.) *

Neighbouring sites associated with the plant, such as the gas holders, have been redeveloped for housing and an extension of the local high school.

No trace of the South Melbourne gas holders remains today – but other gasworks redevelopments have made a feature of these once common landmarks. (See this article about the heritage-listed frame of a former gas holder that is now a focal point of a new property development in Brisbane.) **

The only way that visitors know that this collection of industrial buildings and parkland was once a gasworks is via its name and signage – including the pop art sign a few blocks away that reflects the site’s current function as an art hub but less so its past (even if Lichtenstein did describe pop art as industrial painting).

* The larger of the two South Melbourne gas holders exploded on an otherwise quiet Sunday morning in April 1920 – see this news report. In a bizarre coincidence, someone claiming to have supernatural powers had sent an anonymous letter to the gas company the day before and predicted that an explosion would occur at the site later that month. A Board of Inquiry report found no evidence of criminal action and disregarded the letter.

** Similar redevelopments include the Seattle Gas Works Park and the Launceston Gasworks in Tasmania.