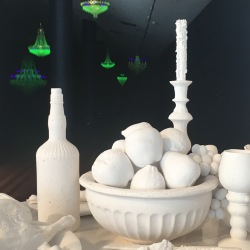 I never cease to be amazed by the range of high quality exhibitions, talks and other events on offer in Canberra. Not bad for a big country town (that just happens to also be a national capital).

In particular, there are two fantastic exhibitions on at the moment that highlight environmental issues and offer free entry. Value for money is guaranteed.

One of these, ‘The Last Temptation’ by Ken and Julia Yonetani, is now showing at the National Gallery of Australia (NGA) Contemporary on the shores of Lake Burley Griffin.

It comprises separate installations that provide a stunning contrast of dark and light and a cornucopia of food for thought and enlightenment. Both take advantage of waste products to create magnificent works of art.

When you enter the gallery, a long banquet table laden with oysters, bread, fish, fruit, and other foods blocks your path.

At one end of the table is a large chandelier comprising strands of grape-like shapes, while on the opposite wall hangs a series of five blank canvases surrounded by elaborately carved picture frames.

Each element is off-white in colour – its bland fragility highlighted by the security guards that hover, ensuring that the few visitors do not touch the gallery’s enticing offerings.

Surprisingly, these artworks are not made of plaster or some other substance that has been painted white. They have instead been sculpted from salt.

As such, this installation makes many powerful statements on many levels – especially when you look out of the gallery’s front windows.

Lake Burley Griffin is actually a dammed river that eventually flows into the Murrumbidgee River. It forms part of the massive Murray-Darling Basin from which the salt for this artwork was sourced. 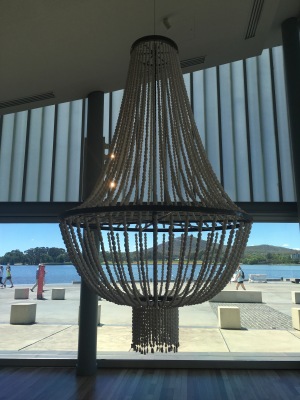 The view combines with the artworks to remind visitors that Canberra contributes to salt loads downstream and is dependent upon the Murrumbidgee Irrigation Area (MIA) where much of our food is grown and grapes are harvested.

The artists explain in a video that humans need salt to survive, but an oversupply of salt can ultimately kill people and destroy waterways, agricultural land and precious nature conservation areas. 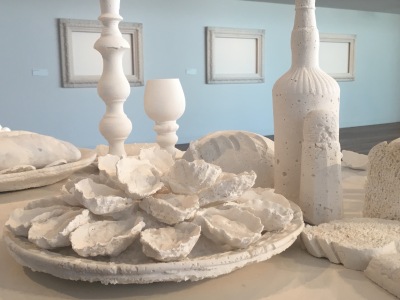 But this exhibition goes even deeper with its reference to the ‘Allegory of the Five Senses’ series painted by Jan Brueghel the Elder and Peter Paul Rubens in 1617-18. The five works celebrated the fabulous wealth and abundance resulting from the expansion of Flemish trading markets into the new world. 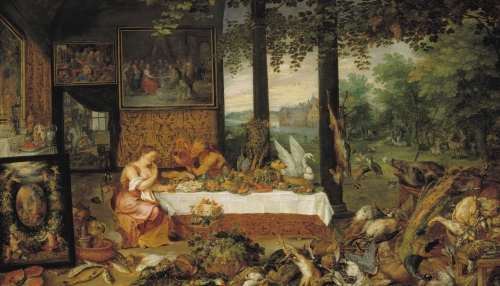 ‘Five Senses’ (2011) replaces the lavish, decadent scenes of the original paintings with barren landscapes that can no longer satisfy our desire for sumptuous things to see, hear, smell, touch and taste. It acts as a warning about the dire consequences of unbridled greed and unsustainable consumption.

Individual interpretations of this combination of works may differ depending on one’s outlook on life. To the pessimist, the installation might suggest that this is the final act with no hope of redemption. Whereas an optimist, might see light at the end of the tunnel and the opportunity for forgiveness and new life.

The back room of the gallery was dark except for the eery glow emitted by eight chandeliers made from uranium glass beads and ultraviolet light bulbs. 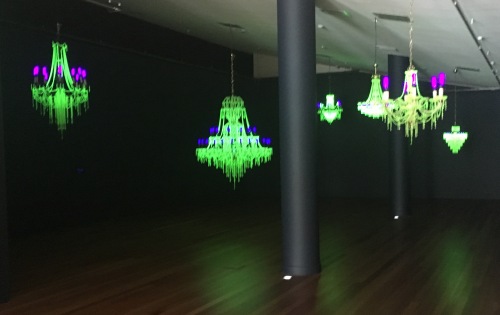 The chandeliers in this room represent a selection of the 31 countries that use nuclear power: Belgium, Bulgaria, Japan, Russia, Sweden, Switzerland, Ukraine, and USA. The size of each light fitting reflects each country’s nuclear output in relative terms.

‘USA’ is the largest chandelier at NGA Contemporary, but an even larger chandelier represents France and has been hung in the main NGA facility, further along the lake shore. 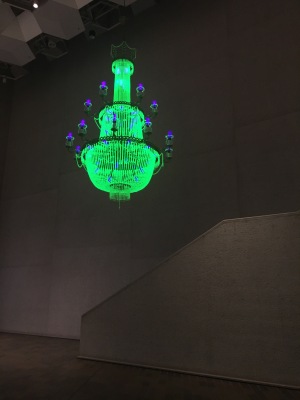 The artwork was inspired by the Fukushima Daiichi nuclear disaster in Japan. It is very timely as debate rages about the recommissioning of old nuclear power plants in countries like Belgium, even as other countries plan to move away from nuclear power. 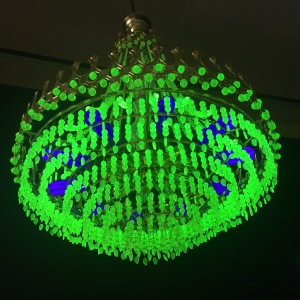 Meanwhile, Australia conveniently sidesteps any serious discussions about the potential for nuclear power to contribute to our low-carbon future – despite our vast continent being politically and seismically stable and having large untapped stores of uranium, thorium and other buried treasures.

Australia also has an important decision to make about whether or not we should set up a nuclear waste depository to store our own radioactive waste, fulfil our extended supplier responsibility related to the uranium we sell to other countries, and perhaps even generate revenue by accepting waste produced from non-Australian uranium resources. 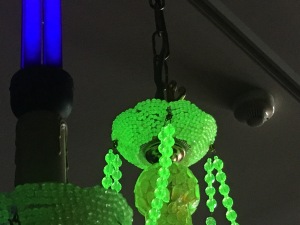 Looking up to view the artworks, I couldn’t help but notice a multitude of other ceiling fixtures, including smoke detectors that almost certainly include radioactive materials. Even if we never build any nuclear power plants, we still need somewhere safe to store radioactive waste.

‘The ‘Last Temptation’ is on display at NGA Contemporary until 25 April 2016 (with extended opening hours and an additional sugar banquet inspired by the Great Barrier Reef during the Enlighten Festival).

The other great exhibition is at the National Archives of Australia. I’ll cover that one in a future post.

Like Loading...
‹ Writers come out of the romance closet for Valentine’s Day
A different type of space that can change your life (Rites of Passage Part 1) ›