Home › Other › Travel › Superlatives – Does this ‘Organum Maximum’ in Sicily live up to its name?

Superlatives – Does this ‘Organum Maximum’ in Sicily live up to its name? 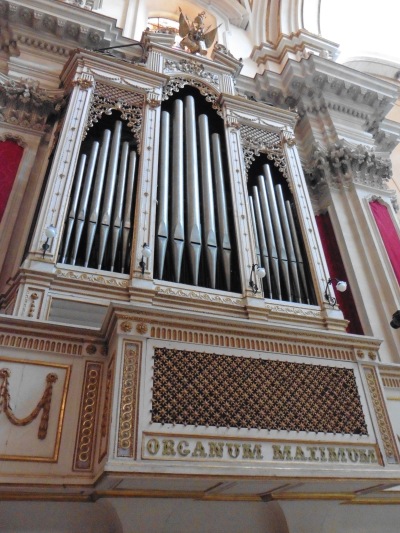 This photo/story challenge seemed like a good opportunity to find out the story behind the name of the organ in the Duomo di San Giorgio at Ragusa Ibla, Sicily.

(Inspector Montalbano fans would probably recognise the Duomo as it regularly features in episodes with my favourite crimefighter.)*

The organ was built in the early 1880s by the Serassi family of Bergamo, one of the most famous dynasties of organ builders.

Despite an impressive number of pipes (3386), this organ does not come close to size of the largest organs in the world. In fact, Ragusa doesn’t even rate a mention in a Wiki list of some of the most notable, largest and oldest pipe organs.**

So what other qualities might justify the claim of ‘Organum Maximum’?

Musicologist Francesco Paradiso suggests that the Serassi Brothers may have sensed that their prominence in organ making was coming to an end and wanted this work to represent the culmination of six generations of work throughout Italy and Europe.

He also proposes that the name reflects an ongoing rivalry between different quarters within the town and their various patron saints. 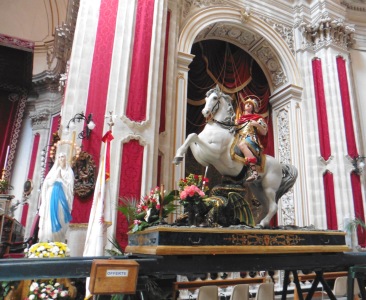 As such, St George’s organ did not have to be the biggest or best in the world, it just had to be bigger and better than the other church organs in Ragusa.

In particular, it had to surpass the 1858 Serassi organ installed in the Cathedral of San Giovanni Battista that had been rebuilt in Ragusa Superiore (Upper Ragusa) on the other side of the valley after the devastating 1693 earthquake.

According to Paradiso, the people of Ragusa Ibla (Lower Ragusa) ended up with a musical masterpiece of unrivalled grandeur and proportion.

I guess that gives some credibility to the organ’s slightly over the top name.

** The grandest organ is actually in the Sydney Town Hall in Australia – with some qualifications (here).

This is my third post in a Five Photos/Five Stories blog challenge that reached me courtesy of Sandy at Hoarder Comes Clean. The rules are: “Post a photo each day for five consecutive days and attach a story to the photo. It can be fiction or non-fiction, a poem or a short paragraph and each day nominate another blogger for the challenge.”

My nomination today is Heather at Heatherblog (if she wishes to accept it). She wrote a great post recently about ‘Americans behaving badly‘ and invited feedback from readers to help cull her photo gallery at ‘Help kill my darlings‘.

For more about Inspector Montalbano – start with this article (here). I was surprised to discover that you can do Montalbano tours of Sicily and buy books listing places that have featured in episodes! We had heard rumours that they might be filming the new series in Ragusa when we were there – but alas, no…

Like Loading...
‹ Super Pippo to the rescue – Make the most of your superpowers
Superstition – Eye spy something creepy in Noto, Sicily ›