Slavery, human trafficking & exploitation in Australia today (Not sweet at all – Part 2) 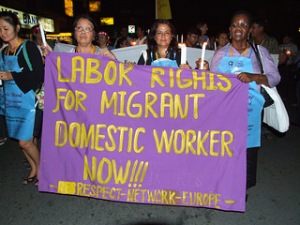 In my last post (here), I discussed the trafficking and exploitation of South Sea Islanders (‘sugar slaves’) in northern Australia and the discrimination that these workers and their families faced until only a few decades ago.

Unfortunately, practices such as slavery and human trafficking continue to this day in Australia (and around the world).

In fact, there may be more people living in slavery and slave-like conditions now than any other time in history. And many of the world’s estimated 20-30 million slaves are children.

There is also an alarming number of women ‘enslaved’ as domestic workers and in forced marriages (including child brides). They are hidden away in homes and work long hours for little or no pay, often endure physical and verbal abuse, and are too frightened or unable to leave.

(Click here to sign their petition – but it will take a lot more than a few petitions to end slavery, forced labour and other extreme workplace exploitation.)

Many businesses in Australia support slavery and unfair work practices overseas through their supply chains – whether they know it or not.

We also need to watch out for slavery and exploitation when we travel overseas.

It can be difficult to find answers and to make informed choices – but this doesn’t mean that we shouldn’t try.

It is also very likely that trafficking, slavery and slavery-like practices are occurring much closer to home.

The rates in Australia are certainly much lower than in many other countries in our region, but there is no room for complacency. A few cases have already been prosecuted and these are probably only the tip of the iceberg.

In 2013, the Australian Unions warned that slavery and exploitation (by any other name) were occurring in the sex industry, on farms, and in construction, domestic work, restaurants, cleaning and manufacturing.

(See this video about Human Trafficking in Australia. It includes scary statistics world-wide and describes the role of the Australian Federal Police, Australian Red Cross and the Fair Work Ombudsman in investigating local cases – here.)

The Salvation Army even runs a safe house for people in Australia who’ve been trafficked as slaves.

(See this 2014 news item and interview with a former victim – here.)

Slavery, trafficking and similar crimes are dealt with under Criminal Code Act 1995. This law is supported by policies such as the National Action Plan to Combat Trafficking in Persons (2003) that focuses on prevention, investigation, criminal prosecution and victim protection and support (in line with the international Trafficking Protocol).

Last year, the Australian Parliament broadened the scope of the Criminal Code in relation to slavery (where a right of ownership over a person is exercised, including as a result of a debt or contract made by the person) when it passed the Crimes Legislation Amendment (Slavery, Slavery-like Conditions and People Trafficking) Act 2013.

The 2013 amendments make it clear that servitude and forced labour are crimes (i.e. where coercion, threat or deception is used and a reasonable person would not consider themselves to be free), as are forced marriage and the illegal harvesting and trafficking of body parts.

What can we do to help?

Anti-Slavery Australia provides many useful resources on this topic and has developed a free online training program (here) for frontline workers from community organisations, government, teachers, health care and law enforcement. The course covers principles for working with trafficked people and details available support, indicators, referral pathways and next steps.

Health care professionals, in particular, are encouraged to look out for victims as occupational health and safety procedures are typically overlooked and often lead to workplace injuries and poor health.

To help identify someone who has been trafficked or is enslaved or in forced labour, ASA suggests asking questions, such as:

When a suspected crime is reported, investigating the claims and prosecuting offenders is only one part of the process.

A lot of the work in this sector focuses on supporting victims (and their families). This includes the provision of financial, medical, accommodation, counselling and other support to ensure that they are safe and can meet their basic needs, and looking after the victims’ mental and physical health and well-being.

But is there a risk that the victims might suffer even more as a result of reporting a possible case of trafficking or slavery? For example:

A number of organisations can provide free and confidential legal and advocacy advice (e.g. here) to address concerns such as these.

I was reassured to learn that people who have been trafficked to Australia have legal rights here and may be able to access special visas (if they are not Australian citizens and do not hold a valid visa). Victims of slavery and trafficking may also be able to obtain compensation for damage suffered.

(Note: Trafficking is not the same as people smuggling – where migrants consent to the smuggling and/or people are not moved for the purpose of exploitation after arriving in the destination country. See this Australian Institute of Criminology brief to understand the difference – here.)

We need to ensure that migrant workers understand that they have the same basic rights and protections as Australian workers, regardless of their immigration status.

If we are serious about providing fair and safe workplace conditions for every person living in Australia, then we should also educate ourselves about workers’ rights, ask strategic questions about supply chains, speak up if we suspect wrong-doing, and spread the word that we don’t want to live in a world with slavery, trafficking and extreme labour exploitation.

And let’s not forget about the immigration policies, unemployment levels, poverty and homelessness, workplace regulation, restrictions on accessing government-funded social services and welfare benefits, and other factors that create a breeding ground for forced labour and exploitation in the first place.

Most importantly, we mustn’t turn a blind eye and pretend that things like slavery only happen overseas.

Like Loading...
‹ Not sweet at all – Australia’s sugar slaves (Part 1)
If you want to stand out or confuse insects, wear Gaultier stripes ›