I love to discover obscure, unexpected and ephemeral delights – such as temporary art installations. Hence my excitement when I chanced upon some ‘locative literature’ while waiting for a tram near Flinders Street Station in Melbourne last week!

Sixteen very short stories had been typed out in ‘Dymo’ (embossed label) tape and were stuck to either side of the tram stop shelter.

Unfortunately, I noticed them just as my tram arrived. When I asked my fellow travellers on the tram about them, no one else had seen them or cared. They were all too busy with their smartphones and tablets.

(Only two people’s attention in my section of the tram had not been hijacked by their technology. Just as the tram reached my destination, I noticed too late that one of them was wearing a cap that said ‘Let’s talk’ on the back.)

When I returned to the tram stop the next day, I was relieved to find that the stories were still there – but soon realised that most people passed by without even noticing them. Some people saw them but couldn’t be bothered reading them. Only a small number of individuals like me read them and were so excited that we pointed them out to other travellers.

A few days later. they were gone. 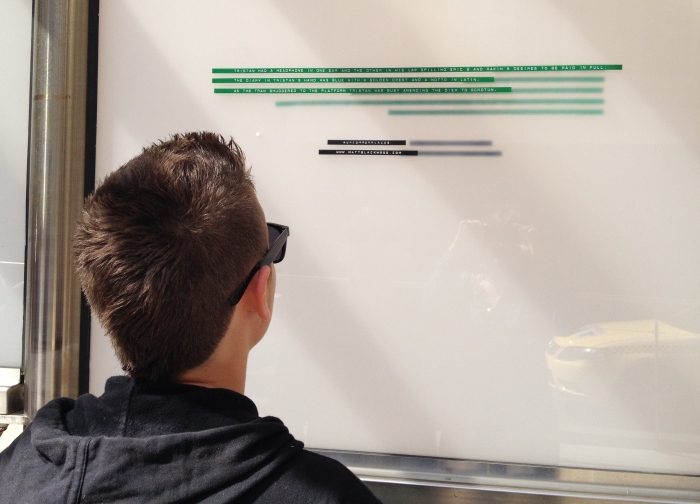 The stories were based on a mix of fact and fiction and offered readers an intimate glimpse into the lives of eight characters on their way to and from the city at different times of the day.

Names (e.g. George, Betty, Janos and Preeti) and details (e.g. spices such as turmeric) were cleverly used to indicate a diverse cross section of society, including different genders, age groups, and racial backgrounds.

I loved the references to schoolchildren defacing their diaries, a bouncer calling himself an ‘entrance solutions officer’, women applying underarm spray and liniment in public, and one commuter’s random thoughts about whether there is a collective noun for collective nouns.

In addition to Melbourne-centric references to coffee, football (it was grand final week), myki (an electronic ticketing system), and local street names and landmarks, the stories also reflected deep emotions such as loss and disappointment, and philosophical insights into ageing and the drudgery of everyday human existence.

There were even political statements – with someone a reading a newspaper article about Australia’s seemingly ‘infinite supply of finite resources’.

(To read the text of a few more stories, visit the artist’s website – here).

It is surprising just how much information and meaning was communicated through only a few lines of text – possibly due to the familiarity of the characters and the ability of the surroundings to provide any necessary (and superfluous) details of sights, sounds and smells without the need for more words.

The stories at the tram stop turned out to be the work of a writer and artist called Matt Blackwood. He defines ‘Locative literature’ as stories that are experienced in the place in which they are set.

Taking advantage of new technologies, Blackwood has also done installations with QR code stickers- where the audience is invited to use their smartphone to scan a sticker that links them to a webpage containing a blurb about the project and a narrated audio file that they can then stream live or download (e.g. here – with seven stories of commuters, homeless men, wannabe skaters and Romanian refugees in Swanston Street, Melbourne).

Nine other artists also created works in different media in some of Melbourne’s other iconic public places such as bookshops, cafes, restaurants, libraries, cinemas, bowling clubs – and the city baths (where Emily Dalkin provided a Melbourne insight into reconciliation – including a photo of a woman in a bikini with a statement tattooed on her back explaining that indigenous Australians were not permitted to swim in public pools until the 1960s).

An interesting blog (here) was set up for this project so that readers could follow the creative process as each artist researched their site and produced and installed their work.

The locations were described as ‘third places’ – social environments that are separate from the home and the workplace and: are free or inexpensive; are highly accessible (within walking distance); involve ‘regulars’ (people who habitually congregate there); are welcoming and comfortable; and provide opportunities to meet both new and old friends.*

Blackwood says that places such as these are important as this is where we connect with the world by being in close proximity to a wide range of people if only for a short time:**

“Tram stops are one of the great meeting places, albeit fleeting and unintentional. These thin concrete platforms with warning stripes and hard metal seats are host to a mix of people and cultures. Tourists and locals, young and old, people with myki cards and credit to spare as well as those who have trouble affording a single fare. It’s one of the few places where students and factory workers, accountants and opera goers rub shoulders…”

He suggests that we should take a moment to observe the people around us at tram stops [and other third places] and consider the type of society they each represent.

Brienna Macnish chose a nearby Maccas (McDonald’s restaurant) to explore the fragility of these places and how they are being eradicated because of prejudice against the social groups using them. She also wanted to remind us that one person’s social hub may be the loneliest place in the world for someone else.