Humans have a fascinating tendency to see faces in random things, such as clouds. This phenomenon is called ‘paleidolia’.

We do the same with cars – and often ascribe personality traits to these inanimate objects based on their front end features.

“Even if people don’t consciously read the face of a car, they certainly do it subconsciously.”*

This trait is important to understand as our choice of car reflects our values and personality (not just our purpose and budget). We ‘wear’ cars – just as don clothes and other accessories, such as sunglasses, bags and shoes (and pets).

While some people are attracted by cute cars with big round headlamp ‘eyes’ and a ‘smiling’ bumper bar or hood, others prefer more aggressive, masculine cars that communicate superiority, seriousness, dominance and power.

The former group are possibly influenced by our genetic predisposition to respond positively to childlike attributes, such as large eyes and rounded shapes. 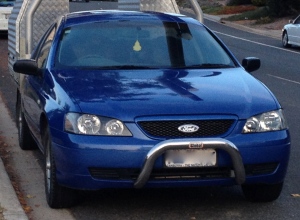 The latter group are presumably responding to features that are typically associated with higher levels of testosterone, such as smaller and more angular headlights (eyes) topped with strong lines (brows), and balanced by wider jaws and big chins (and perhaps even a bull bar as a moustache?).

(You might think it’s crazy but conversations about car names and personalities apparently work really well as pick up lines for women who feel that these topics are not taken seriously or appreciated by the average bloke.)

There are also car owners that are more interested in helping to save the planet by buying an hybrid or fully electric car (and in letting other people know this by making sure that their car can be easily recognised).

(I am not normally a South Park fan but I love Kyle’s dad driving around town in his hybrid ‘Pious’ to show it off and promote its eco-credentials – here. The Chaser suggests that playing an intellectual radio station or driving to an environmentally friendly destination might further improve fuel efficiency.)

Marketers take advantage of our paleidolia, to some extent, by designing cars that aim to ‘connect’ with prospective buyers and represent the image that owners wish to portray.

In reality, manufacturers cannot change the design too radically as the car still needs to be familiar (as this tends to engender trust) and some components, such as grilles and bumpers, are critical for branding. There are also safety, technological and cost constraints to consider. 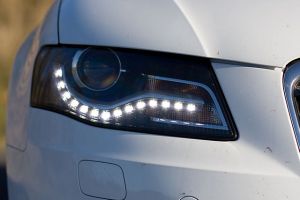 However, innovative LED and plastic extrusion technology are revolutionising features such as car lighting and body design by allowing sleeker wraparound forms, freeing up space by providing more light from smaller more versatile fittings, and being able to better integrate components. Just think of the possibilities with 3-D printing!

Companies will presumably be able to customise the ‘face’ of cars with ever increasing sophistication – building on the currently available range of colours and other optional extras.

Perhaps people will even be able to provide a picture and order a car that looks like them or their favourite celebrity in the future?

As we don’t wear the same clothes every day, we would ideally have multiple cars to choose between – but for most people this is cost prohibitive and impractical.

We can already buy accessories such as glow in the dark car eyelashes (e.g. here) and car bling such as diamond encrusted number plates (e.g. here) – but imagine if we could flick a switch to change our car’s ‘expression’ to communicate how we are feeling on any particular day.

For example, it should be relatively easy to modify the shape or angle of LED light ‘eyebrows’ above the headlights to indicate that ‘I’m having a great day!’ or ‘I’m tired or sad – beware of erratic behaviour’ or, most importantly, ‘I’m in a foul mood – get out of my way!’

Even more emotions could be portrayed if the ‘mouth’ could also be adjusted. And perhaps one day we will also be able to make our cars wink or bat their car eyelashes?!

Note: This was inspired by a fabulous post about a dream cars exhibition by Hoarder comes clean (here).