Using wombats to promote your blog and support good causes

I am a big believer in the power of ‘word of mouth’ marketing and ‘peer to peer’ referrals.

These models rely on trust and are especially well suited to blogs – where a recommendation, link or other promotion via a blogger that you respect is worth far more than most other marketing approaches (such as spam).

Therefore I was very happy to accept an invitation to participate in a blog hop. (Thank you to 4 Mothers for this honour – stay tuned for a post next week.)

I was also excited to learn about another great way to promote blog sites and provide a social good at the same time – the charity challenge.

Bearman Cartoons is offering to donate money to charity whenever anyone features him in a comic or mentions him in a blog post or on Google Plus. (See here or click on the graphic for details)

I heard about this promotion through Tony McGurk who publishes a webcomic called Out the Bush about a group of native animals living in Freycinet National Park in Tasmania.

As Tony included the green-haired character (featured above) in his latest comic strip (below or here), Bearman will donate $10 to one of the three causes that he has nominated (plus an extra $5 for me mentioning the challenge in this post).

As an added bonus, Tony is raising awareness about Australian native animals, such as the Spotted Tail Quoll, that are under threat due to land clearing, predators and other pressures.*

What a fantastic idea. Sounds like a win-win-win to me!

It is very appropriate that the character starring alongside Clancy the Quoll in Tony’s comic strip should be Ed Wombat.

This concept is described by Australian Michael Hewitt-Gleeson in his book ‘WOMBAT SELLING’ as a way to maintain a strong customer focus and increase profitability by encouraging customers to function like an unpaid salesforce. 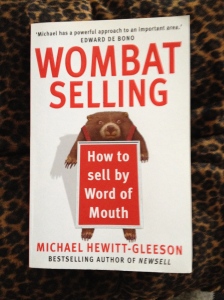 He says that everyone is a WOMBAT – all the time. (Including me – click on the photo to get a free e-copy of the book.)

However, consumers are rarely recognised for their important role in promoting new ideas, great opportunities, and our favourite or latest goods and services.

(A key difference between WOM and WOMBAT is that with the latter, the person has actually bought or done something that they were happy with and has shared their experience with other people who then repeat the process.)

Hewitt-Gleeson says that WOMBATs love to pass on secrets and stories but get bored easily. They also tend to distrust sales pitches and hate to be boxed in or pressured – and may warn off other WOMBATs when warranted.

And although WOMBATs like to be part of the action and be appreciated, they may be suspicious of rewards and incentives that are offered too freely or that go to the person providing the referral (especially if it makes the offer sound less credible).

(I am very happy for Bearman to give money to charities that I had never heard of before yesterday but wonder if I would have been as motivated to write this post if there were no donations being offered to worthy causes or if Tony was receiving the money instead!)

Social media is making it much easier for WOMBATs to tell other people about products and services that they like or dislike.

Unfortunately, most companies still have a lot to learn in terms of achieving consistently high levels of customer satisfaction and packaging their messages in a way that is simple and attractive enough to make voluntary WOMBAT marketing teams want to pass them on.

Some of them might want to consider a charity challenge!

* Spotted Quolls are carnivorous marsupials that make fierce cat-like calls during their breeding season – earning them the alternative name of Tiger Quoll. (Why not ‘Leopard Quoll’ given the spots?)