Wartime austerity – a time when recycling was not optional

I’ve just finished reading about Australia, Singapore and the Malay Peninsula during the Second World War in a novel called ‘To Love a Sunburnt Country’.(1)

The story provided a fascinating insight into life at the time and how Australians responded when war was in our backyard and, at times, right on our doorstep.

During this period (following hot on the heels of the Great Depression), people learnt to be very thrifty and resourceful as food, clothing, petrol and many other household items were rationed and/or hard to come by.

(Production had been geared up to manufacture items that supported the war effort and fewer ships were available to import tea and other goods from overseas. It was also felt that Aussies at home should make sacrifices like their Allied compatriots and loved ones at the front.)

Wasting scarce and valuable resources was frowned upon and buying or selling goods on the black market was considered to be unpatriotic – not just illegal.

If Australians had any spare cash, they were encouraged to invest in war savings schemes instead of frittering it away on ‘selfish comfortable habits’ and ‘luxurious impulses’.(2) 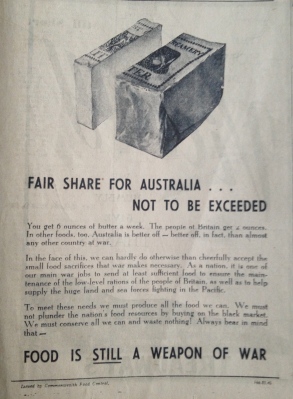 Learning to make do

These included many posters with familiar slogans related to waste minimisation and energy efficiency, such as ‘Don’t boil two pints – when one will do’.

As a direct result of food rationing, cooks learnt to make meat pies without beef and to make desserts without sugar (e.g. by grating apples and dried fruits into cakes to add sweetness).

And the menfolk learnt to fix machinery when spare parts weren’t readily available and experimented with combining and substituting ingredients when paints, adhesives and other chemical compounds were in short supply.(3)

Restrictions on petrol for non-essential purposes resulted in a resurgence of train travel in urban areas and horses in the country – and bicycles everywhere.

Fuel shortages also lead to innovative solutions – such as gas producer units fitted to cars and trucks that could run on charcoal or other solid fuel. (See here for details. These units were also used for tractors, irrigation pumps and some power stations.) 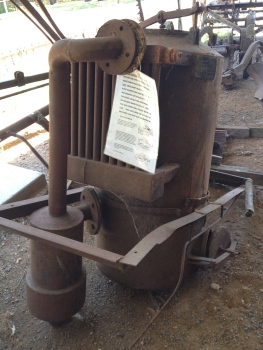 Fabric rationing resulted in wartime clothing styles that used less material, fewer buttons, and no fancy trimmings, and were generally in drab colours (as fabric dyes were in short supply).

Newspaper and magazine articles encouraged readers to be creative and convert tired suit jackets into bolero jackets, evening gowns into day frocks, and worn out garments into children’s clothes.

If necessary, a skilled seamstress could create new coats, suits, shirts and underwear from blankets, men’s suits, wedding dresses and bedsheets. (Remember Scarlet in Gone with the Wind making a dress from green velvet curtains during the American Civil War?)

(One Australian designer, Beril Jents, even used potato sacks to create coarse linen couture garments in the late 1940s when fabric was still in short supply. She apparently bought hessian sacks from the local greengrocer, soaked and boiled them, and then added embellishments such as shells, raffia (straw) and embroidery.)

During the war, it was relatively common to unravel woollen garments and reuse the yarn. Fair Isle jumpers (sweaters/pullovers) were often favoured as these patterns were well suited to the random mix of available colours.

(Participating in activities such as knitting groups and fund raising played an important role in providing psychological support and companionship and making Aussies back home feel like they were doing their bit to help their country and loved ones who were fighting overseas.)(5) 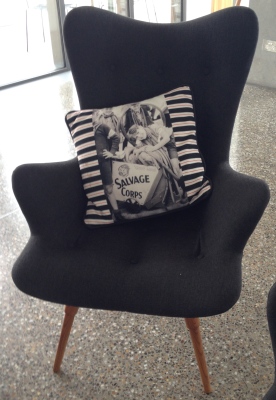 Children were encouraged to go door-to-door to collect recyclable items such as aluminium, rubber, paper and rags. Patriotic citizens willingly handed over pots and pans and other goods in the hope that they might be turned into aircraft and other military equipment.

Many items, such as beer bottles, were collected for reuse well into the post-war era when supplies were still scarce and many basic commodities were considered precious. 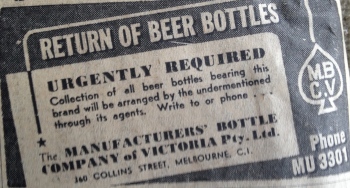 It makes sense that growing up during this era would have a lasting impact on your attitude in terms of how you live your life and organise your home.

Some people might choose to continue their thrifty ways, while others may reject them as a way of banishing the memory of tough times.

My mother made lots of our clothes when I was young and knitted me jumpers in different sizes so that I could layer them. She also did things like dying her fabric wedding shoes with tea so that she could wear them with other outfits.

Old jumpers were relegated to the garden or farm before they could be considered for disposal – or until my mother couldn’t bear them anymore. After Mum died, Dad continued to patch up holes in jumpers instead of simply throwing them out and buying new ones.

My father taught me by example to keep nails, screws and other building materials (including odd bits of timber and metal), while my mother showed me how to remove buttons and zips from clothing and tear the fabric into strips to use as rags.

Like many families all around the world, my parents used jars for storing grains, nuts, spices and other food stuffs and for bottling jams, fruit and sauces. (This photo is my neighbour’s cupboard.) 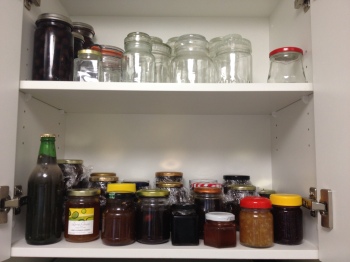 Dad also bought cooking oil in large containers and decanted it into empty beer bottles (stubbies) fitted with reusable pourer spouts (probably to save money rather than to minimise packaging waste).

My father was a master of improvisation. Kitchen drawers, for example, were fitted with cut down plastic containers as dividers and the stationery drawer was a hodge podge of glass jars, biscuit tins and even an old can of SPAM full of paper clips, rubber bands and pens.

He made his own notepads with paper that was only printed on one side (without any thought for the world’s rainforests) and kept ‘good’ pieces of cardboard, bubble wrap, wrapping paper and ribbon for future reuse.

And from humble beginnings playing with Meccano, he progressed to building all sorts of contraptions, such as this stand for his first computer that was cobbled together from old shop display brackets and glass shelving.

(My father saw no reason to pay good money for something that you could make for a fraction of the price. And besides, there weren’t many off the shelf computer stands around in the early 80s. “Just like a bought one’, he would remark while proudly surveying his handiwork.)

Reusing and recycling items is certainly not a new idea. But, nowadays, being resourceful is often due more to ideology than necessity.

In contrast, my parents mostly thought that environmental management was a ridiculous waste of time.

I remember extolling the virtues of recycling to my parents, only for Dad to reply “Our little bit doesn’t matter. Next thing, I suppose you’ll tell us that we’re overfishing the oceans. Huh!”

Ironically, my parents already reused and recycled a lot of their waste – from Mum composting in the garden and cooking up leftovers to Dad’s thriftiness and handyman ingenuity.

With these role models during my formative years, it’s not surprising that I love to produce my own compost and find it hard to throw out jars, plastic containers, wrapping paper and other items that might be useful one day.

I know I can go and buy new items if I need them and that hoarding takes up space and creates clutter.

But there is something deep in my soul that wants to hold on to ‘potentially useful’ things rather than discard them – even when I know that they would (hopefully/probably) be recycled.

So, am I motivated by a genuine concern from the environment when it comes to waste management or am I simply a product of the way I was brought up? And does this matter?

(1) The title refers to the Dorothea Mackellar poem that I mentioned in an earlier post – here. The author, Jackie French, has written lots of great books for adults and children and is the 2015 Senior Australian of the Year. Her portfolio covers both fiction and non-fiction, and includes books on permaculture, chooks and other environmental topics.

(2) In a wartime broadcast, the Prime Minister appealed to Australians “to strip every selfish comfortable habit, every luxurious impulse, every act, word and deed that retards the victory march.” Source: ‘Wartime “austerity”‘ & other pages at the Australian War Memorial website (Accessed 4 March 2015)

(3) Many women undoubtedly had to do ‘handyman’ jobs while the men were at war.

(4) The 1940s Society website provides a good overview of ‘French, American & British Wartime Fashions’ – here. Fashion-era.com focuses more on the impact of rationing on clothing in Britain in the 1940s – here.

(5) The therapeutic effect of knitting is being promoted at the moment in jails and as a way to treat mental illness and neurological disorders – as mentioned in a previous post – here.

Photo credits – Pip Marks (The ration books were photographed at the Shrine of Remembrance in Melbourne, Jan 2015. The fantastic furniture upholstered with wartime posters are in the Australian War Memorial cafe in Canberra, Feb 2015. The newspaper clippings are from Melbourne papers published on the day that peace was declared in the Pacific.)

Like Loading...
‹ It will take power & passion to save the planet
Explore the Elements: Thomas Cook Photography Competition ›