I recently stumbled upon an interesting site (www.convictcreations.com) claiming that the contemporary Australian dialect (‘Strine’) is “one of the world’s most advanced English dialects.”

The author went on to explain that speakers of Strine can understand kiwis (New Zealanders), poms (Brits), yanks (Americans – no matter which state), Canadians (I don’t think we have a name for them) and other English speakers – but they can’t necessarily understand us. And we can deliberately choose to confuse all of them if we feel like it.

I hadn’t ever thought of Strine as an advanced form of speech before. And it had certainly never occurred to me that Aussies had such a sophisticated command of the English language. We truly are the clever country, wot?

The main differences appear to lie in the words and expressions we use, the way we construct sentences, and our pronunciation and intonation. In particular, we have a tendency to assimilate, invent and play with words and to say the complete opposite of what we mean.

I couldn’t help but wonder why Strine has developed and what impact it has had on our communication and society as a whole. What an appropriate topic to celebrate ‘Straya Day’ (Australia Day – 26 January)!

(Note: I recommend having a bash at the unofficial Australian Citizenship Test first – here. If you pass, there is probably no need to read any further.)(1)

Borrowing from indigenous Australians & other immigrants

Many typically Australian words were adopted from the indigenous language spoken in the Sydney area (where the British landed in the late 18th Century) so that the new inhabitants could describe what they saw.

These include the names of many of our native animals, plants and landscape features, such as the kangaroo, wallaby, koala, wombat, kookaburra, bilby, galah, dingo, bogong, waratah, quandong, kurrajong, coolibah, billabong, and willy willy. (See Wikipedia for more examples and links to find out what they mean – here.)

Aboriginal places names were used in some cases (e.g. Sydney suburbs such as Parramatta, Kirribilli, Bondi, Wooloomooloo, and Coogee; and towns such as Wagga Wagga and Canberra) or are now being reintroduced to recognise the traditional owners (e.g. renaming Ayers Rock as ‘Uluru’ and calling a prominent new development in the middle of Sydney ‘Barangaroo’).(2) & (3)

A range of general terms has also been adopted into common usage by non-indigenous Australians, such as:

[Note: Wallabies and Brumbies are also the names of Aussie sports teams.]

New words from indigenous Australian languages (of which there are many) are still being introduced. For example, in 2008 the Western Australian Noongar word ‘karrik’ for smoke was used to form ‘karrikins’ – that describe a substance in plants that stimulates seed germination and seedling growth after bushfires.

Many of the expressions that arrived with the early immigrants from Great Britain had their roots in the criminal underworld (e.g. ‘swags’ that originally referred to a thief’s plunder or loot).

Other expressions were borrowed from traditional Irish and Cockney rhyming slang, such as: bread (& honey/money); brass tacks (facts); and porkies (pork pies/lies).

(I was always told that ‘pommy’ (or ‘pom’) began life as an acronym – ‘Prisoner Of His/Her Majesty’ – but I recently learned that it may have come from ‘pomegranate’ – rhyming slang for ‘immigrant’.)

In some cases, we took existing words and changed the meaning slightly to suit the Australian context. For example, ‘muster’ was originally an assembly of troops or convicts but in Australia refers to the process of rounding up livestock for counting, branding, and drenching etc.

Some phrases have their origins in Old English sayings that died out in ‘the mother country’, such as ‘Strewth!’ (God’s truth),  but persisted for much longer in this Great Southern colony (oops, constitutional democracy/monarchy). Many of these are now at risk of disappearing here as well and are most likely  to be uttered by ‘Ocker’ characters in films like ‘Crocodile Dundee’ rather than in every day parlance.

[I have never said phrases such as ‘strewth’ or ‘fair suck of the sauce bottle’ and can only think of one friend who might do so on a regular basis. However, I do occasionally use terms such as ‘Bob’s your uncle’ (all fixed/everything’s okay) and ‘out Woop Woop’ (i.e. in the outback/imaginary location in the middle of nowhere – not far from ‘back o’ Bourke’).]

We also came up with new words, such as ‘larrikin’ – that started out meaning a young man who was likely to cause trouble but later took on a more positive connotation (similar to ‘scallywag’). 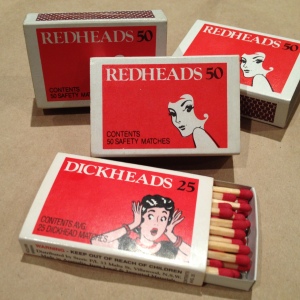 To hear a very impressive compilation of Aussie slang (that would make the average Aussie cringe), ‘take a squiz’ (glance) at this short video by the ABC’s ‘Checkout’ team: ‘Struth about Australian Made‘ (here).

(You’ll probably be flat out (like a lizard drinking) trying to keep up and feel like a stunned mullet (dazed & confused) afterwards.(4)

At the very least, look out for Dick Smith who was responsible for producing these ‘Dickhead’ matches as a homegrown alternative to Swedish ‘Redhead’ matches.)

When you see how confusing the advertising and labelling is, you’d be justified in being ‘mad as a cut snake’ (angry). They must have ‘a few kangaroos loose in the top paddock’ (or be ‘a few stubbies short of a six-pack’) if they think we’d fall for the ‘Made in Australia from imported ingredients’ label, surely?!

[ED 25/1/15: I just realised that Dick Smith isn’t in this Checkout clip. See his 2013 Dick Smith Foods Australia Day Ad instead – here. This  uncensored version is not allowed to be shown on Australian TV due to the high levels of ‘innuendo’.]

TO BE CONTINUED – Stay tuned for Part 2 tomorrow!

(1) Thanks to http://www.lifeinthefastlane.com for letting me know about this test. His glossary of Aussie terms applied to emergency medicine is also excellent (Ausenclature).

(2) The name ‘Canberra’ is thought to derive from an indigenous language spoken in the local district but its actual meaning is debated. Possibilities include ‘meeting place’ (as it was the point of confluence of three rivers where many tribes would gather on the way up to the high country) and ‘hollow between a woman’s breasts’ (in reference to a floodplain between mountains).

(3) Many Australian places, animals, plants and brand names were included in the classic ‘Australiana’ video clip (performed by Austen Tayshus & written by the author of ‘The Twelfth Man’). Examples include: Might cook a ‘burra or two. Vege might come too. Do you wanna go, Anna? I’ll go if Din goes. How much can a koala bear? The original 80s version is here but a revised version provides visual prompts to make it a bit easier to understand – here. It has also been used as the basis of a Subaru ad that I saw on TV while I was editing this post!

(4) A mullet is also a bad 80s haircut that is still favoured by a particular segment of the Australian community – see my previous post about bogans (here).

Like Loading...
‹ Is IKEA sustainable or evil? No ikea!
The Great Aussie Dialect – History & humour in action (Part 2) ›