Home › Environment › Biodiversity › Surveys are for the birds. Hey, look! A sheepdog!

Surveys are for the birds. Hey, look! A sheepdog!

This post starts out with a ‘citizen’ backyard bird survey and ends with me deciding that a kelpie or other sheepdog is the Australian ADHD equivalent to a squirrel. Confused? You should be… but the connection is actually very straightforward.

During Bird Week (20 — 26 October 2014), volunteers have been asked to spend 20 minutes each day in their backyard, local park, beach, forest, paddock or other outdoor area, and to record any bird sightings and submit them via a website checklist or special app (that has a built-in field guide).

The website shows live statistics on the number of ‘citizen scientists’ taking part, and the number of birds and species seen at different locations across Australia.

I thought the survey sounded like a great idea but for various reasons I did not feel qualified to participate.

My main reason for this was that I would no doubt lose concentration and not know which birds I had counted and which I had missed. It would all become too stressful and I would probably wish I had never tried to do it in the first place.

I also wondered if counting birds would be like counting sheep and could send people to sleep.

Had Birdlife Australia considered the implications of this and included a warning or disclaimer on their app? For example, something along the lines of:

WARNING: This survey may affect mental alertness and/or coordination. If affected, do not drive a motor vehicle or operate coffee grinders or other machinery.

What a catch-22: You desperately need coffee to wake yourself up to keep doing the survey but it may not be safe to prepare yourself a caffeine fix.

Maybe the instructions should suggest that participants make a strong cuppa before starting the survey each day?

My other reason for not doing the survey was that I would probably check the app’s field guide to identify a bird that I don’t recognise and be distracted by all of the other birds.

Before I know it, the 20 minutes will have zoomed by and I would still be glued to the screen with no reported sightings of any birds (regardless of the actual stats).

Or I would start to notice butterflies and other non-target species. Hmmm, I wonder if someone has an on-line field guide for insects?

(Check out this great video called ‘How to know if you have ADHD‘ to understand just how distracting butterflies can be. Try really hard to watch it to the end!)

And then I would probably start to wonder why the survey is only about birds. Why not do a backyard insect survey as well? Perhaps someone already does this? Especially if birds eat the insects, then this is a critical part of the food chain… I wonder if there is an Insect Week?

You get the idea…

And then I would notice some weeds that are going to seed and gutters that need painting and holes in the back fence. I would undoubtedly miss a few birds while I go inside to find the phone number of the painter and go to the shed to find some wire to fix the fence.

And while we’re at it, why not count other animals as well, such as possums? Except that this would be pointless as many of them are nocturnal and keep different hours to the birds. (See my post about avian squatters in my backyard for more on this – here)

And what about squirrels, for that matter?

It suddenly occurred to me that maybe the Australian equivalent of ‘Hey, look! A squirrel!’ (shorthand for when someone with ADHD has been distracted by something) might be ‘Hey, look! A possum!’

But, on reflection, I decided that possums are not really suitable as they do not meet enough of the criteria set out by Zoe Kessler in her excellent analysis entitled ‘ADHD and Hey Look! A Squirrel!‘ (DSM approval pending).

For example, possums do not have restless tail syndrome or forget where they stored their nuts (as far as I know). And they can sit still for ages hoping that we don’t notice them – and do not therefore meet the Kessler law of constant motion.

Although I can’t vouch for their creativity, risk-taking and social skills, I am fairly certain that possums do not chatter incessantly – but they can be very noisy when they are in or on your roof.

In terms of criminal tendencies, possums do steal fruit and food scraps out of the compost heap. They could also possibly be arrested for (un)wilful damage to property when their urine stains ceilings and they make nests in the insulation and cause house fires by damaging light fixtures and disturbing (but not eating) electrical wires.

In addition, possums do not play nicely with dogs, birds and other backyard inhabitants and may attract rats and other undesirable types that eat their droppings.

Despite displaying a few ADHD-like characteristics, I am reasonably confident that possums do not share any deep psychological bonds with people with ADHD (if you trust Zoe’s research about the innate affinity between people with ADHD and squirrels). They therefore would not qualify for this prestigious honour.

Searching for an Australian squirrel

But if not possums, then which other Australian animal might fit the bill?

And then it hit me!

Kelpies and similar breeds might not steal peanuts, lose bones, procrastinate or tire of repetitive tasks (as long as they are sufficiently challenging), but I reckon these high-energy dogs meet enough of the other criteria for them to feature in my proposed Aussie ADHD catchphrase ‘Hey, look! A sheepdog!’.

“One of the smartest of all breeds, the Australian Kelpie can also be one of the most challenging to live with. His superior intellect, combined with his independence, intensity, and passion for keeping busy, are his best features — and the ones that make him unsuitable for most homes.

This sharp-eyed, quick-thinking, fanatical workaholic must be allowed to do his job with livestock, to learn advanced obedience or agility, to accompany you jogging or biking, or to chase balls or Frisbees.

Without physical and mental stimulation, Australian Kelpies become bored and hyperactive and will drive you crazy with obsessive, destructive behaviors as they seek creative outlets for their energy.” 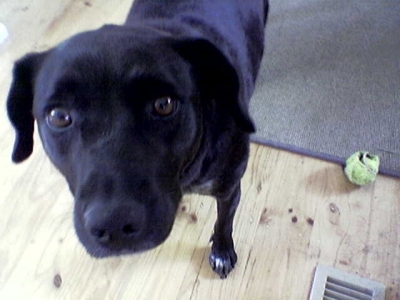 So this is why I have not yet downloaded the app, much less started the bird survey.

But I do have a post to publish… And a new appreciation of sheepdogs in terms of ADHD.

The photos in this post are of my beautiful labrador [blue heeler] kelpie cross who is now herding sheep, kangaroos and anything else that moves in the eternal paddocks in the sky. Consistent with the risk factors for this breed, she fell prey to a car at a relatively young age while trying to round up a cat during a period of intense hyper focus. This particular blend has been described as resulting in ‘extremely intelligent, hyperactive, juvenile delinquents’ (here).

For more about Australian kelpies, see here or check out the short video by Animal Planet at this site – here.

For more about what it is like to live with ADHD, see this great post ‘If Your Friends Ever Say They Have ADHD, Just Show Them This‘.