Home › Other › Gardens › Altered perspectives & foreshortening in the real world 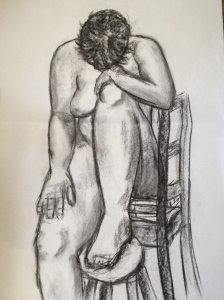 Most people who have studied art or tried their hand at life drawing in the past 500 years or so will probably have learnt about perspective (the optical illusion that causes objects close to us to appear larger than those that are further away) and foreshortening (that causes objects or distances to appear shorter than they actually are when angled towards the viewer).

Famous examples of foreshortening in the art world include Mantegna’s painting of the ‘Lamentation over the Dead Christ’ (noting that pedantic critics say that Christ’s feet should be much larger and his head smaller), Michelangelo’s statue of ‘David’ in Florence (topped by an extra large head as it was designed to be viewed from below) and ceiling frescoes by artists such as Tiepolo (where foreshortened figures appear to float in the clouds or inhabit elaborate trompe l’oeil architecture).

These and other Renaissance, Baroque and later artists and designers had worked out that foreshortening and altered perspective techniques could be used to create the illusion of 3-d space and depth. However, it takes a lot of skill to get it just right. (Astute readers will have already noticed that I should have shortened the model’s right upper leg.)

(For a good summary of foreshortening techniques and examples, try here.)

We can all play around with perspective at home by using proportion, scale, colour, shapes, pattern and texture to trick the eye depending on the desired effect.

For example, small gardens may seem larger if the far end is slightly narrower (as this exaggerates the illusion of perspective) or if the relative size of objects in the foreground and background is carefully manipulated (e.g. by planting taller upright plants near the home and shorter plants placed closer together at the back of the garden).

We can also borrow ideas from landscape painters to make objects look further away – such as using muted colours (especially blues), less texture and softer edges to simulate the effect of moisture, dust and other particles in the atmosphere that scatter light in the distance. (e.g. here)

Similar techniques, as well as mirrors, lighting and segmentation, can be applied in reverse to ‘shorten’ long narrow internal and external spaces and make them feel more comfortable. (e.g. here)

Most home interiors also employ a very simple form of foreshortening correction in their construction.*

Is anyone like me and measured their door hinge spacings to check the difference? Is this standard practice in every country? Let me know!

* According to Stephen Fry on QI. However, practical souls claim it has more to do with optimal weight distribution and the size and position of the top and bottom door rails than visual effects.