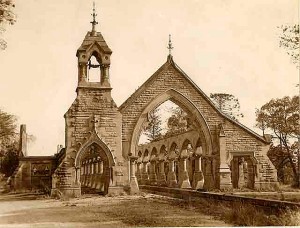 I love to watch shows like ‘Grand Designs’ – but I often find the people behind these ambitious projects to be far more interesting than the architecture.

In general they are either quite naive (‘No. I have never done anything like this before’) or slightly crazy (‘We aim to be in by Christmas. In the meantime we will sell our home, live in a caravan with our two kids, and maybe have another baby’).

What they all have in common is a bold vision and a total commitment to their dreams. They refuse to listen to the naysayers (including Kevin McLeod) and simply trust that things will work out in the end. They also inspire builders, suppliers, regulators and other people along the way who all play their part.

Similar traits are often required of people involved behind the scenes in the planning and realisation of large civic buildings and places of worship.

For example, there is a church in Canberra that was once a train station at a cemetery in Sydney. It was saved from demolition and resurrected stone by stone to become All Saints’ Anglican Church in Ainslie in the late 1950s.

Blessed are those with vision, passion and determination for they will achieve great things and help to change the world. Hallelujah!

In the past, mourners would follow the coffin on foot from home to a simple ceremony at the graveside in the nearby church grounds.

However, when cemeteries were moved to the outskirts of town for space and hygiene reasons, mourners needed horse-drawn carts and trains (and later cars) to reach the burial site.

In 1868, a big gothic ‘tunnel’ (later called the No.1 Mortuary Railway Station) was built to shelter funeral processions at Rookwood Cemetery on a spur line off the Sydney to Parramatta railway line.

(This was the first of four train stations constructed at Rookwood over the next few decades. The others were called No. 2, 3 & 4. Sound familiar? See here)

[Ed. 25/4/2014 – Check out this post for photos of the other 3 stations at Rookwood Cemetery and what remains today.]

As a sign of respect, train travellers waiting at other platforms would tip or remove their hats as cemetery-bound trains passed by.

The station building began to fall into disrepair as cars took hold and the railway track was pulled up in 1948. The structure was scheduled to be demolished and the rock crushed – with only a pair of angels to be spared.

Fortunately, a saviour of sorts came to its rescue and the building was instead offered for sale.

An advertisement was noticed by a rector in Canberra whose congregation had outgrown its current premises and had the foresight to seize this opportunity with an offer of £100.

A builder called Stanley Taunton volunteered a year of his time to undertake the project. He set up camp at Rookwood while he took detailed measurements, drew up plans, and numbered every stone before the building was dismantled.

The stones (and many of the surrounding roses) were then transported to Canberra and laid out in piles around the site awaiting their second life.  I was told that some of the parishioners helped to clean the stones after tennis matches on the adjacent church courts. 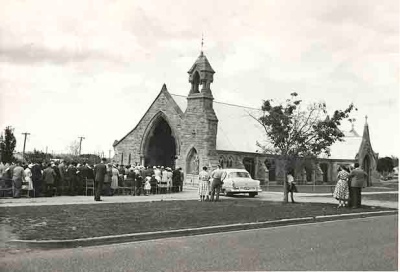 Stan put the stones back together to form a church in 1958 with some modifications to the original layout (e.g. the tower was moved to the opposite side).

The original timber roof had been destroyed in a grass fire at the cemetery and was replaced with a brand new roof.

The bell that was used to warn mourners of the train’s imminent departure had been stolen and was replaced with an old train bell donated by the NSW Stream-Tram & Train Preservation Society.

The large openings that had previously allowed access between the platform and the surrounding cemetery were closed in with windows.

A dedication service was held in 1959 (see photo) and, funnily enough, All Saints’ had become one of the oldest buildings in Canberra.

A few years later, a stained glass window was installed in the east wall to replace a painting done by a parishioner as a temporary measure.

This Memorial Window had previously adorned the east wall of St Clement’s Church in Sheffield, UK. It was designed by Kempe Studios, renowned in this field, and had been paid for with donations and fund raising activities by local parishioners.

The window was first unveiled in 1918 while the Last Post was sounded and was intended as a tribute to the 700 men of Newhall who had served and sacrificed their lives in the Great War.

It was removed when the church was closed in 1961 – the victim of decreasing patronage, the area’s industrialisation and never-ending maintenance bills.

The story of how this window ended up in Australia centres on a visit by Sir John Betjeman to All Saints’ with Lady de L’Isle, wife of Australia’s Governor-General from 1961 to 1965, who attended this church during their term in Canberra.

Sir John was the guardian of Anglican church architecture and is believed to have offered All Saints’ the choice of six windows that had been removed from disused churches in England.

P&O apparently shipped the window to Australia free of charge, while a government grant and more fund-raising paid for the window’s restoration and installation.

The Memorial Window was re-dedicated on Remembrance Sunday in 1967 ‘to the glory of God and those of this parish and district who gave their lives in World War 2’. 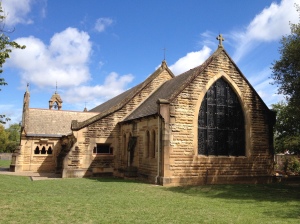 Just like the brave (or naive and crazy) souls who undertake the restoration of heritage buildings featured on TV shows, the parish had bought the building for a song and spent far more (around 270 times this amount) turning it into the church we see today.

And the expenses keep on coming – with around $100,000 spent recently on restoring and protecting the stained glass window.

The organ was also obtained from a church in England in 1989-90. It had been built in 1857 by Bishop and Starr, one of the finest of the English Victorian organ builders, and was originally in Wealdstone Baptist Church, Harrow.

And the floor tiles were replaced to provide better acoustics for services and music concerts.

The church still relies on the dedication of many volunteers for its every day functioning and to plan for its future. The church council has recently obtained approval to build student accommodation on land now occupied by the tennis courts. Revenue from projects such as this (and a fighting spirit) is critical to protecting the church and its work.

Like Loading...
‹ Why not celebrate Easter with green eggs, chocolate bilbies & protein balls?
The end of the line – Sydney’s mortuary train stations ›