When I visited the Royal Botanic Gardens at Cranbourne (on the outskirts of Melbourne) recently, I was struck by the numerous road signs along the entrance route that implored drivers to slow down for snakes, wallabies, lizards, bandicoots and people. 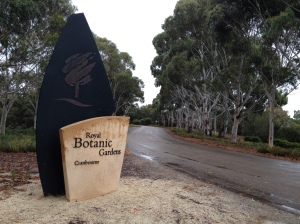 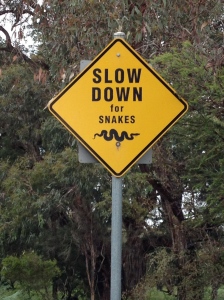 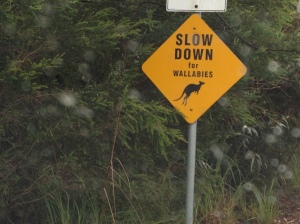 There was one sign, in particular, that aroused my interest. Maybe it was simply warning drivers that there was a speed hump ahead? 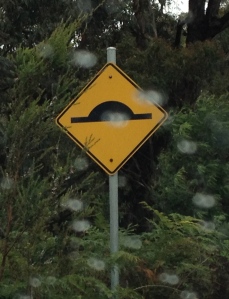 But for any grown-ups out there that still have some imagination left, maybe it was like a drawing in Antoine de Saint-Exupery’s ‘The Little Prince’?

When the narrator in the story showed his drawing to some adults, they all thought it was a lop-sided hat (and not a very good one). They failed to see that it was actually a boa constrictor swallowing an elephant.* 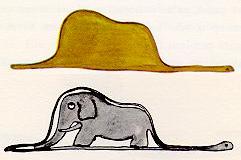 So does anyone agree with me that the road sign at the gardens might be warning drivers to watch out for snakes that have swallowed a wallaby?

And in case you think this is not possible, check out this disturbing video.

(Mind you, I doubt the sort of snakes found at Cranbourne are likely to seek out such large prey or I would have been a lot more nervous walking through the bushland.) 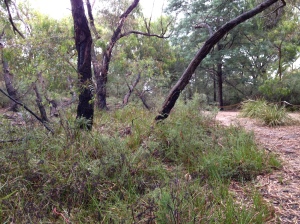 * For more about The Little Prince and keeping a child-like sense of wonderment, see: ‘The Big Lesson of a Little Prince: (Re)capture the Creativity of Childhood‘, Scientific American by Maria Konnikova (18 March 2012)

The Little Prince illustration is taken from the Konnikova article – from the original version of ‘Le Petit Prince’ published by Harcourt Brace & Company (1943), renewed by Consuelo de Saint-Exupéry (1971)