Home › Environment › Design › Canberra – A city where the landscape rules

Canberra – A city where the landscape rules

The original design of Canberra drew heavily on ‘City Beautiful’, ‘Garden City’ and other aspirational town planning movements that placed a high priority on the landscape.

But have the ideals and vision of Canberra’s founding and subsequent ‘parents’ and designers resulted in a sustainable city in the 21st Century?

See an earlier post for a discussion about the selection of Canberra’s site.

In the fledgling city’s centre, national monuments, institutions and other significant buildings in the stripped classical and deco [and later modern and post-modern] styles were set out along grand tree-lined boulevards – contrasted against a background of the natural landscape.

Hills became focal points and were encircled by concentric roads and linked by major axes. Rivers were dammed to create a large central lake and to flood a series of nearby valleys to ensure a reliable water supply.

Homes, with neat front gardens comprising lawn and mostly exotic species, were laid out in formal rows along wide streets surrounded by lots of urban greenery and parkland. Each suburb was zoned with a local shopping centre. Semi-industrial areas were relegated to separate suburbs on the outskirts.

The aim was to promote a healthy lifestyle and high levels of amenity by providing residents with fresh air, access to light, land for growing plants and keeping animals, and proximity to natural areas for recreation.

As the city grew, the focus shifted from the centre of Canberra to multiple major town (commercial) centres in neighbouring valleys and new planning trends were adopted.

The emphasis on the landscape was retained but took the form of less formal green corridors that extended between and within the suburbs. Building was prohibited on the ridge tops (that were revegetated as grazing was progressively withdrawn). 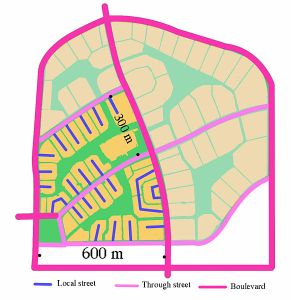 ‘Radburn’ planning was introduced to connect homes in cul-de-sacs with schools and shops via networks of pedestrian/bicycle paths, underpasses and open parkland – without residents having to cross a major road at grade.

Natural watercourses and low-lying areas were given over to carefully engineered drains and sports fields within the green corridors and were designed to control runoff and function as flood detention basins.

Artificial lakes were created near the new town centres to provide landscape and recreation features – and to act as huge water filters that collect debris from the built up areas and stop it reaching the rivers.

Extensive areas of the Australian Capital Territory (ACT) were also designated as nature reserves, river corridors and national parks as part of a comprehensive open space system under the National Capital Plan (as shown in the ‘Land use in the ACT’ pie chart *).

The landscape has clearly continued to play a dominant role in Canberra but this has come at a price.

Urban development, fragmentation of ecological communities, pest plants and animals, pine plantations and bushfires have impacted on water supplies, biodiversity and other natural resources – despite the city’s efforts to promote sustainable development and to protect the environment.

It has also created a heavily car-dependent city and made it very expensive to provide and maintain roads, utilities, public transport and other services (quite apart from the cost to maintain the open space areas themselves).

Some dual occupancy and infill development has been undertaken and medium density apartment blocks have been built near the major town centres and transport nodes since the 1950s.

However, new low density suburbs and broadscale commercial and industrial sites continue to encroach upon farm land and greenfield woodland and grassland sites that are home to a range of endangered and vulnerable species.

And houses that might have been home to a family in the past, often have only 1 or 2 occupants nowadays – increasing the city’s footprint more than the relatively modest population growth figures might suggest.

A report published last week predicts that Canberra’s population may more than double in the next 40-50 years.**

Who knows what impact this scale of expansion would have on the lifestyles of current and future Canberrans, much less the environment? But it seems very likely that there will be evermore pressure to build on previously undeveloped areas within the city and to significantly increase population densities within any new suburbs.

*** Until 1966, married women could not be permanent employees in the Australian Public Service (and single working women were obliged to resign on the eve of their wedding). By 1973, these women would have qualified for both paid maternity leave and equal pay for work of equal value. Check out this video.

Like Loading...
‹ Magic fridges (or How to get what you want 2)
Can cricket jargon help to create a better and more inclusive Australia? ›