Home › Environment › Water › When nature calls: More people in the world have a mobile phone than a toilet

When nature calls: More people in the world have a mobile phone than a toilet 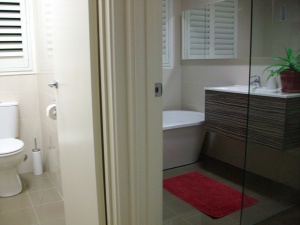 The world celebrates its first UN-sanctioned World Toilet Day on 19 November. The Day aims to raise global awareness of the serious health, privacy and other challenges faced by the 2.5 billion people living without access to clean safe toilets.

Check out this animated promo encouraging people to: ‘Give a shit!’

It also helps to promote the work of organisations, such as Water Aid, that build toilets for those in need, look for new ways to deal with human waste, and campaign for improved sanitation and hygiene facilities for communities around the world.

And programs such as ‘Reinvent the Toilet Challenge‘, that see human waste as a potential resource and aim to develop culturally appropriate toilet technologies that avoid the sort of infrastructure and investment required to establish and run large flush toilet networks.*

But the problems are not just related to toilets – many people become sick from not having clean running water with which to wash their hands after going to the toilet or before they eat.

Check out the Tippy Tap – a clever low-cost low-tech alternative to a hand basin with a foot-operated lever made from a container, a few sticks and some string.*

For those of us who are sanitationally blessed, World Toilet Day is a chance for us give thanks for what we have. It doesn’t take long when camping, renovating the only bathroom you have or dealing with a blocked drain to appreciate simple luxuries such as a functioning toilet, hot shower or a running tap.

It is also worth remembering that the sewerage systems on which most modern cities depend have only been around for a few hundred years (or less).

Sewage in Australian cities was disposed to open drains that flowed along the streets and into rivers and creeks well into the 1890s and even later in some places. 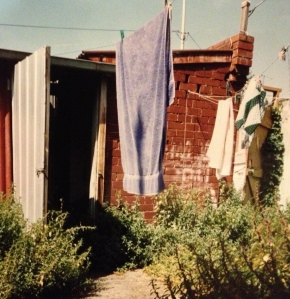 Some human waste, however, was collected by ‘nightmen’ once a week from outdoor ‘dunnies’ (like the one in these photos in the backyard of a dodgy terrace house where I lived for a while as a student).

These ‘outhouses’ backed onto laneways and were located as far away as possible from the house due to the smell and health risks (as it was believed at the time that a number of [water-borne] diseases such as cholera and typhoid were spread by air).**

The first Australian city to have a fully functioning, water-borne sewerage system was Adelaide in 1881.

Check out this short historical video about Adelaide: ‘The loo in review‘ – featuring the classic Aussie tune ‘Redback [spider] on the toilet seat’.

Construction began on Melbourne’s sewerage system in 1892 with a network of underground sewers that carried sewage to a treatment farm at Werribee before being released into Port Phillip Bay. 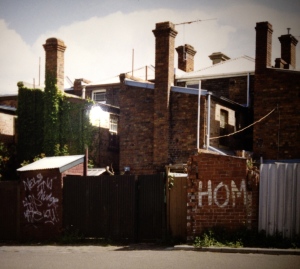 Whereas Sydney’s approach was to pump its waste out to sea with minimal treatment – such that raw sewage sometimes ended up on its famous beaches. (This gave birth to the infamous ‘Bondi cigar’ – the bane of unwary swimmers and not to be confused with the great Australian blues band of the same name.)

Toilets eventually moved inside and were progressively connected to reticulated sewer networks (and to the drinking water supply for flushing and hand washing).

Going full circle, some people are now installing composting (non-flush) toilets or are treating and reusing their own wastewater on site and want to disconnect from the reticulated network! (See here and here for examples, including an inspiring video about a sustainable terrace house in the middle of Sydney.)

Unfortunately, changes to washroom fixtures and how we use water have sometimes been good for water efficiency but bad for sewerage networks.

For example, dual flush toilets, waterless urinals and greywater recycling concentrate contaminants and alter solid:liquid ratios, pH and other sewage characteristics. This can lead to corrosion and clogging of ageing pipe infrastructure and put pressure on hydraulic and treatment systems that have been designed to quite different specifications.

There are also calls to require dual and triple reticulation systems to supply different qualities of water depending on the end use. While the principle of not using potable water for toilet flushing is commendable, it increases building costs and may pose health and contamination risks if not well managed. It is also adding to the complexity of an already complex system.

An alternative to our current focus on water scarcity and conservation is to develop a culture of relative abundance via the capture, treatment and reuse of rain, storm, grey and black water – and possibly even the reintroduction of treated water back into the potable water supply as part of a closed loop system (instead of sending it on its merry way downstream) – as long as the cost can be justified, any potential health risks addressed, and the public ‘yuk’ factor overcome.

Canberra and Toowoomba were two Australian cities that proposed controversial ‘indirect potable water reuse schemes’ during the last drought but neither scheme was approved. Who knows what will happen in the name of water security when the next water shortage hits?

In the meantime, spare a thought (and maybe some cash) for those who don’t even have access to a decent toilet and clean water for hand washing.

* Thanks to Ideas that Inspire for sharing a post about the Tippy Tap and to AdamShawBiz for a post that lead me to the Reinvent the Toilet Challenge.

** This was also one of the reasons for planning straight streets in cities like Adelaide, Melbourne and Sydney so that the air could flow freely to clear ‘miasma’ instead of the narrow winding roads in older cities where it was believed that disease could not escape.

Like Loading...
‹ Plastic bags & bottles – but what about the plastics we can’t see?
Thank you for dealing with all of our crap – the humble dung beetle [& not so humble cane toad] ›