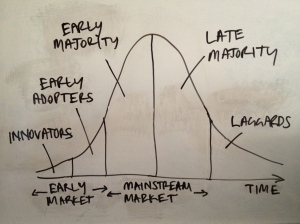 Adapted from Rogers Diffusion of Innovators (1962)

A recent article* posted on The Conversation suggested that we should ban the word ‘sustainability’ due to the common practice of using a small number of performance indicators to compare companies or products while ignoring the real issues.**

The article also highlighted another important point – about the way that new ideas, practices and technologies are adopted and adapted by populations over time.

The author writes that Corporate Social Responsibility (CSR) ‘initially had worthwhile aims’ but ‘is now more commonly used by corporations to out-worthy their competitors’ and has ‘been reduced to tick-box auditing with the aim of allowing businesses to demonstrate that they are no worse than their competitors’.

As far as I can see, CSR hasn’t necessarily been marginalised or degraded by the tick box audits, rather it may be evolving and being integrated into the core business of ‘average’ organisations. This may be evidence of its progression from something that only innovators and early adopters were doing to more widespread uptake by the majority (and eventually even the laggards).

It all depends on whether the audits were being used to benchmark the best and worst companies or products within or across sectors or to promote the adoption of good practices by companies.

Around ten years ago I was drafting an environmental management guide for the local motor trades industry. This complex, time consuming and often frustrating exercise caused me to wonder whether developing simple checklists, codes of practice, guidelines and other tools was worth the effort.

I ultimately came to the conclusion that tested, systematised, complete (and preferably easy and cheap to implement) good and better practice tools are essential – but these complement (i.e. do not replace) the ongoing quest for innovative and best practices by the existing and emerging leaders (large and small) within a sector.

My reasoning was based on the different characteristics of the various groups along the diffusion process or technology adoption lifecycle.

The early market is made up of innovators who get excited about new concepts and technologies (but are likely to move on to the next big thing soon after) and a small group of judicious risk takers or ‘early adopters’ who see the potential for achieving competitive advantage by doing something different (and/or are genuinely concerned about the environment).

This group is open to new ideas and is often willing to give them a go even if they are still at draft stage or they have to work with suppliers or researchers to develop solutions or trial new technologies.

However, broadscale adoption of sustainable and socially responsible practices requires us to engage the largest group – the early and late majority.

The majority think quite differently and tend not to listen to government agencies, the mass media or the people directly providing products or services. Instead, they listen to their peers and the leaders among the early adopters (and maybe their customers and shareholders).

Business leaders who are pioneering environmental and social sustainability initiatives can be approached to spread the word but:

Policy makers and program managers may therefore need to come up with strategic incentives to encourage potential opinion leaders to use their influence.  For example, awards and case studies offer reputation benefits, star ratings and certifications help to differentiate their products and justify their eco-claims, tax breaks and grants can help to cover any increased costs and risks incurred, and relaxing red tape reduces the likelihood that legal or administrative barriers will inhibit the rollout and promotion of unconventional approaches.

‘Translators’ may also be required to help interpret, refine and spread the leaders’ message within the industry and its supply chains and to other key stakeholders and the general community.

The early market doesn’t want or need others to do all the work for them as it already appreciates the value in changing the status quo, whereas the mainstream market is more likely to welcome a proven and relatively streamlined solution.

Targeted and effective tools need to be available at the right time to back up what the leaders say and to meet the future demand for reliable and consistent information and support.

Some of the early majority may be willing to help develop and pilot these tools (based on what the leaders have already done) – especially if there are other business benefits such as access to industry leaders, lower utility costs or safer work practices.

Uptake by the majority tends to happen quickly as a new idea or technology finally takes hold – especially when a critical mass (or tipping point) is reached or a crisis hits. There is limited time to develop tools or undertake consultation at this point. This is when you want the tick box audits with a simple instruction guide already online!***

Tools developed for the late majority, in particular, may not seem very exciting or challenging to practitioners working at the cutting edge of sustainable design or cleaner production.

Checklists and other pared down tools are designed to bring up the rear. The focus is ideally on getting rid of the worst practices in terms of unacceptable environmental risk and unethical or unsafe work practices etc.

These tools hopefully address the key environmental and social issues related to this sector and the areas in which its members operate. They can also establish a ‘good practice’ baseline or industry accepted minimum standard that most companies in the sector will aim to meet within an agreed timeframe (i.e. beyond strict legal compliance).

They generally offer little or no expectation of any market advantage unless they knock out strategic competitors in other jurisdictions who cannot meet this baseline. On the contrary, they may even put late adopters at a disadvantage while they implement the necessary changes that other groups have already made (possibly with subsidies or other assistance) or are not required to meet (e.g. overseas competitors).

As industry leaders continue to raise the bar, this baseline will shift – but it will always lag behind and have less ambitious goals than those to which the leaders aspire at the time. It will also inevitably be watered down by the compromises involved in seeking agreement across large and diverse groups of organisations and communities whose main focus is elsewhere.

The definition of sustainability (and CSR) is not static and is definitely not straightforward. Agreeing on the key country- and sector-specific issues and identifying appropriate performance indicators and how to assess them is an even more complex process.

Keeping the lines of communication open and encouraging informed debate on these topics is the least we can do. We need to reclaim the word (if it has been hijacked or corrupted) and educate people about sustainability – not get rid of it!

We also need to keep in mind where individuals, organisations and sectors are positioned along the technology adoption spectrum so that we design effective behaviour change programs, set realistic and appropriate goals and targets, and keep the conversation relevant and meaningful to all parties.

* The article by Doug King was reblogged by The Guardian as ‘Why the word ‘sustainability’ should be banned’ on 30 August 2013.

** See my post re eco-jargon versus common sense.  Let’s try to use plain English and terms that audiences understand and relate to, wherever possible, without having to refer to a dictionary.

*** Geoffrey Moore describes this point as a ‘tornado’ in Inside the Tornado (1995).

This post is based primarily on content from a presentation I gave at the launch of a breakfast series hosted by mecu and Green Globe 21 in Canberra in 2004.

Like Loading...
‹ Remember when recycled paper was easy to pick?
Why not turn water tanks & reservoirs into landscape features? ›