Home › Other › Art › David Hockney’s digital drawings: To do, not to do, or to undo

David Hockney’s digital drawings: To do, not to do, or to undo

I often wish I had an ‘undo’ button in real life, not just on my computer.

This feeling generally hits me after moving heavy furniture – when it looked better beforehand – or when I’ve been a bit too vicious with my pruning saw. Or when I wish I could take back something I’ve said or done.

I’ve also heard artists lament the moment when they realise that they should have stopped working a bit sooner. (e.g. here) Compared with media like oil and pencil, watercolour and ink are particularly unforgiving in this regard.

However, artists prepared to embrace the digital world now have a relatively easy option to reverse their work or to apply virtual erasers and other editing tools when they make a mistake or change their mind about something – especially if they build the work up using multiple layers.

David Hockey’s digital drawings at an exhibition in Melbourne illustrate just how versatile, exciting and forgiving these new media are.

In particular, it was fascinating to watch the animations as each digital stroke built up to become a finished artwork on a nearby wall. The videos are works of art in themselves, with the added bonus of laying bare the artist’s creative process.

​​
There was even a huge display made up of mulitiple screens that showed a view of Yosemite and how it was created (artistically, not geologically). 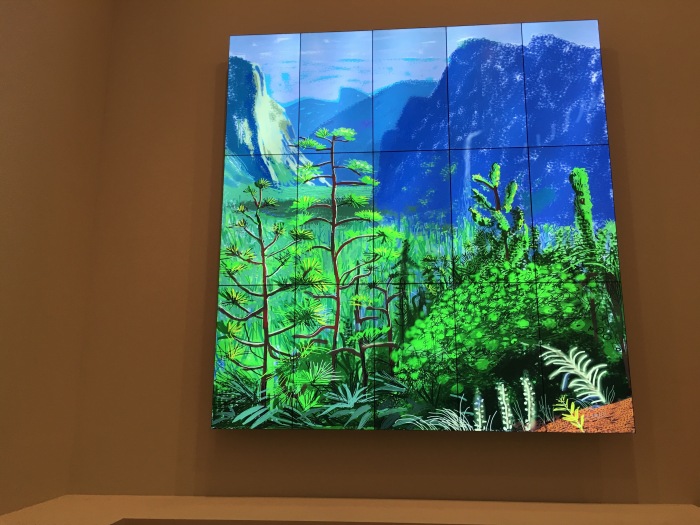 I couldn’t help but wonder if you played the video in reverse, would it send a message about deforestation? And was the wailing child at the gallery thinking similar thoughts?

​​
The subject matter for Hockney’s smaller works included lots of portraits, as well as everyday objects such as scissors, candles, vases of flowers, ashtrays, and even iphones and chargers.

The simple addition of an adapter in one drawing added some story – so you understood that the artist was overseas – even if you hadn’t read the book’s subtitle. The inverted reflection of the power socket in the phone’s screen looks like Munch’s Scream and gives the viewer  a clue as to what this English artist thinks about the question “Will Europe ever fit together?”

It wasn’t until this point that I realised the significance of the adapter in symbolising one of the many differences between the UK and the rest of Europe. This drawing is far from a simple doodle created by a bored traveller in some foreign hotel room.

Noting that these small sketches were all done between 2009-11, Hockney seems to foreshadow Brexit and proves that digital art can claim the status of ‘real’ art. Even more so, when you ask yourself whether the obscured title of the book was ‘WARNING…’

Hockney also raises the bar when it comes to otherwise boring text messages, prompting us to take the opportunity to make unique artworks instead of just adding a few generic emojis. 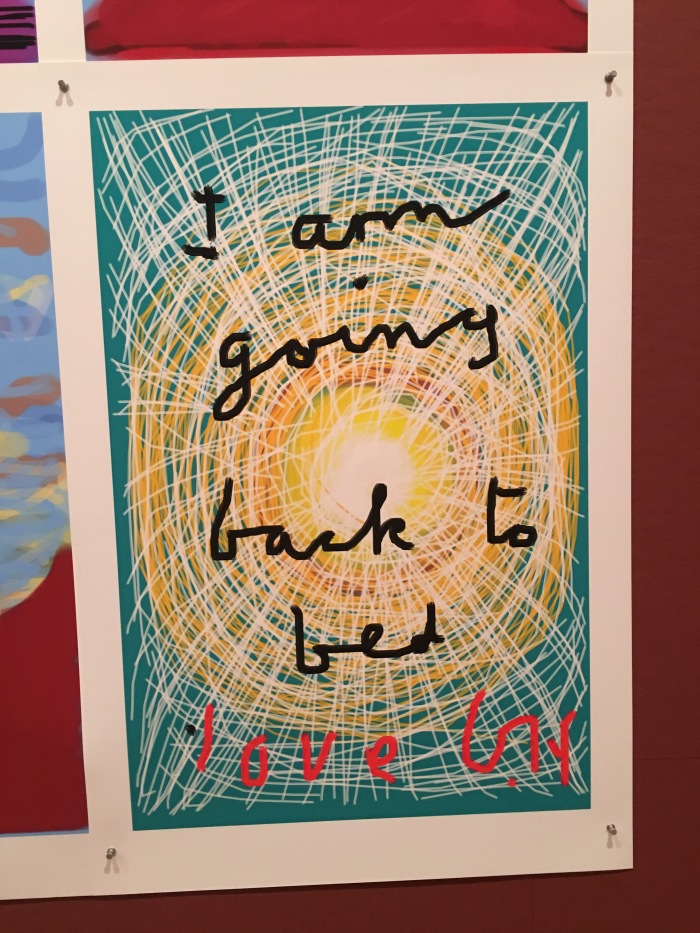 And why not embellish the photos that we take? He makes it look so simple, instead of relying on meme creators that dictate the font and placement of any text.

Given that Hockney was born in 1937, it’s hard to argue that we’re too old to do this. Is anyone keen to give it a go? Why not? If we make a mistake, all we have to do is hit ‘undo’.

All works photos & videos in this post were taken on 27 Dec 2016 in Melbourne at the ‘David Hockney: Current’ exhibition showing at the National Gallery of Victoria (International) until 13 March 2017. #DavidHockneyNGV

Artworks by David Hockney include:

Like Loading...
‹ All I wanted for Christmas was some concrete & a few rocks
The sanitation gap in developed countries – International Women’s Day 2017 ›